What is Amazon Echo?

Amazon Echo is a speaker that can be controlled using your voice. This product has been sold in Germany since October 26th 2016 and in the United States since 2015.

Echo connects to the Alexa Voice Service. The loudspeaker is optimally tuned and fills every room with a very good sound. The loudspeaker has 7 microphones and directional beam technology. This technology allows the sound to be heard even on the other side of the room.

To activate the loudspeaker, just say the following word: “Alexa” (factory setting). Echo will then light up and wait for a command such as “Alexa, what movies are being shown at the cinema? To activate the voice control of Echo, the device can be switched to “Computer” or “Amazon”.

The device displays the individual phases of readiness, speech recognition and processing via coloured luminaires. Voice control can also be switched off completely via a button on the device. This deactivated voice transmission is signalled by a red lamp.

The spoken words are transmitted over the Internet to the manufacturer, from where they try to execute the spoken commands. Locally, the device is connected to the Internet via a WLAN network.

What can Amazon Echo do?

Music can be played by Amazon Music, Spotify, Tuneln and other services. Using Amazon Music you can search for lyrics or alternatively let Alexa select the music.

If you want to play music with an echo in another room, this is possible with Multiroom music. The music is played on several devices. It is available for the services Amazon Music, Tuneln and Spotify. Bluetooth is currently not supported (as of September 2018).

In order to activate this feature, ask Alexa to play pop in the kitchen, jazz in the living room or the same song in the bedroom.

Use Amazon Echo to turn on the light before getting up, turn the thermostat higher or dim the light from the sofa – all without having to move yourself.

Among others the following devices can be controlled with Amazon Echo:

Among others the following manufacturers are supported by Echo:

With a supported Amazon Echo or Alexa App, hands-free speech is possible – without having to type or search. In addition, voice and text messages can be sent to anyone using an echo device or Alexa App.

The start is very simple. Download the Alexa app to your smartphone and verify your phone number. With the drop-in function you can quickly connect echo devices in other rooms. In the future, children can be reminded to go to bed without having to call them.

Amazon Echo has thousands of skills and new ones are added daily. Skills will add more features, for example new recipes with the Chef’s Skill.

To activate new skills, just ask Alexa or add more using the Alexa app on your smartphone. Ratings from other users will help you choose new skills.

With the Skill-Marketplace Amazon has created a new platform where you can not only install skills on your echo device, but also offer your own skills. Even without in-depth programming knowledge, you can develop your own Alexa skills using a user-friendly web interface.

Echo in connection with Amazon Prime

Order millions of items using your own voice. Voice purchases are delivered without additional charge. Alexa can even take care of shipment tracking. Prime members can also access more than 2 million songs with Prime Music. The music is simply streamed to the Amazon Echo.

To keep Alexa learning, she is automatically updated via the cloud. The more often you use Echo, the faster your language habits will be recognized. Even your own vocabulary is taken into account.

Amazon Echo is available in a variety of designs and materials to make it a perfect match for your interior.

The following selection is available:

Amazon Echo models at a glance 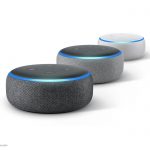 Use Alexa in any room: The Echo Dot can be connected to a loudspeaker via Bluetooth or a 3.5mm stereo cable, but also has a speaker of its own, which doesn’t sound as good due to the compact size of the device.

Amazon reacted to the criticism of some echo users about the lack of children and youth filters by introducing the Echo Dot Kids in 2018. Technically this is the identical version of the normal dot. Only the streaming and skill selection is limited here, both of which can be preset by the parents.

The powerful Amazon Echo speaker fills the room with a 360 degree sound. Available in a variety of colours and styles, this handy speaker adapts to any style. The “normal” Echo was also the first device of the Echo family (sales start on 06.11.2014 in the USA).

Amazon Echo Plus is a powerful speaker with clear sound and dynamic bass. In addition, the speaker includes the ability to set up Smart Home. The Home Hub makes it easy to integrate and control compatible Smart Home devices.

The round and compact design of the Echo Spot makes it a real eye-catcher. The integrated screen allows you to display song lyrics of the music being streamed. With the current version (2018), Amazon search results from the Marketplace cannot yet be displayed here. This also applies to the Echo Show.

Thanks to Dolby stereo sound and a dynamic bass, the Echo Show generates a room-filling sound. The information is clearly displayed on the integrated display. Similar to the Echo Spot, the Echo Show can also display song lyrics (if supported) during audio streaming.

Using Bluetooth or a 3.5 mm jack, the Amazon Echo Car Box can be connected to almost any car. Echo Car must also be configured using the Echo APP on the smartphone and then works just like the other Echo devices with voice control. 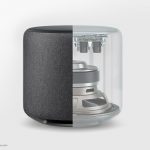 Amazon Echo speakers have often been criticized by customers for their bass quality. Amazon’s answer is the Echo Sub, which is equipped with a 15cm woofer specifically for the lower frequencies. The subwoofer can be coupled with two Echo and two Echo Plus speakers for improved sound quality.

Echo Buttons – Fun and games with the Alexa Gadget Skills

The Echo Buttons in combination with Alexa provide an absolutely new gaming experience. Compatible Alexa skills such as Trivial Pursuit can be activated to play with friends or family for hours.

The setup is also known to be very simple. For this the batteries are inserted into the Echo Buttons. After that the setup of Alexa is finished with the words: “Alexa, set up my Echo Button”. Then the echo button is held down for about ten seconds until it glows orange. The button switches to pairing mode.

After a few seconds Alexa gives the information that the pairing is finished. For signaling the button now lights up blue. This step is repeated for each individual Amazon Echo button. Now the new game experience for the whole family can begin.

With Echo Connect and a compatible echo device Alexa can be used to call any person. This is done via your own landline number. Since Echo Connect uses its own house connection, the called person recognizes the caller. If calls are received from another room, hands-free calls can be made. This is, of course, particularly ideal if lunch is being prepared or no hand is available for making calls.

With the Alexa App the contacts on the smartphone remain synchronized with Alexa. So you don’t have to look up phone numbers. It works the same way when a call comes in and the phone number is in the contact list on the phone. When a call is received, Alexa tells you exactly who is calling.

With the words: “Alexa, take the call” the call is answered and the telephone fun can start.

Dimensions and weight of Amazon Echo