Why Is Amazon so Successful?

In 1994 Jeff Bezos founded his company “Amazon” and in August of the same year, the New York Times asked the provocative question in its newspaper: “Has the internet been overhyped? They were just as wrong as Microsoft boss Bill Gates, who even stated in 1995: “The Internet is just a hype”. In the same year, Amazon managed to achieve a turnover of 20,000 US dollars just by selling books by word of mouth alone. Bezos soon realized: This success attracted many “copycats” and competitors. The only chance to prepare his company for the future is to grow and innovate quickly. “Get big fast!” became Amazon’s credo.

In 2001, Amazon was profitable for the first time in the company’s history: a full $5 million profit was made by Bezos from a billion dollars in sales. Converted, this means a return on sales of 0.5% – for investors, an underground result despite the first black figures. But profit was not on Bezos to-do list from the beginning. He has always been all about growth and innovation – not often to the annoyance of investors and shareholders.

Amazon – The Everything Store

Only those who try something out and risk failure can be innovative. Bezos has often failed on Amazon on a small scale, but that has never taken him off course. The goal of “Day One” has always been to build an “Everything Store” – a platform where anyone can buy any physical product. Today, in 2018, Amazon has already come closer to its goal. In Germany alone, Amazon offers over 300 million active products – a portfolio that makes Amazon the largest retail webshop in the world.

For Amazon, innovation also means constantly reinventing yourself. While the attempt to enter the jewelry business failed in 2005, the prime service was a true success story that still has a significant influence on all of Amazon’s products and services today. In 2007, the next big thing happened: the Kindle e-book reader was launched and sold out worldwide within hours. In 2011, Prime Video was launched and many other innovations followed: Amazon Robotics, Amazon Web Services (AWS), Prime Air, Amazon Go, Amazon Pantry, Amazon Echo, Amazon Dash, and many of Amazon’s own trademarks were launched.

With over 560,000 employees, Amazon is one of the largest employers in the world, with 3 times more employees than Google, Facebook and Alibaba combined. The combination of a huge range of products, the prime service, and the “Customer First” principle has created a system that is unique and redefines the retail industry. Many users of the platform (especially the prime customers) do not always buy something on Amazon just because they need it urgently, but much more because it is simply fun and easy to do.

On 28.02.2017 it felt as if the entire Internet was paralyzed: Spotify, Dropbox, Tinder, Pinterest and many other platforms were offline for several hours. This was not due to a transatlantic cable break or a hacker attack. It was simply a typo by an Amazon developer who made a mistake in AWS, Amazon’s own cloud system. The Amazon cloud is so attractive in terms of price and technology, and its performance is so good that many services rely on this system. If it fails once, this has fatal consequences for millions of users – Amazon already has such power today.

And Amazon is also penetrating deeper and deeper into the structures of everyday life for end customers. With Alexa, the speech recognition hardware, Amazon is already directly connected to millions of households. Echo, Echo Plus, Echo Dot, Echo Dot Kids, Echo Connect, Echo Spot, Echo Show, Echo Look – these are all devices that already work, learn and collect data at home and in the office.

It also becomes interesting when you read through who Amazon itself is confronting. In “Form 10-K”, the annual report for securities companies imposed by the US government, Amazon lists the following competitors:

If you look at it from a bird’s eye view, then this is probably almost every economically active company that is currently operating in digital business. And that’s not even megalomaniac from Amazon, because the company is already active in all these areas. 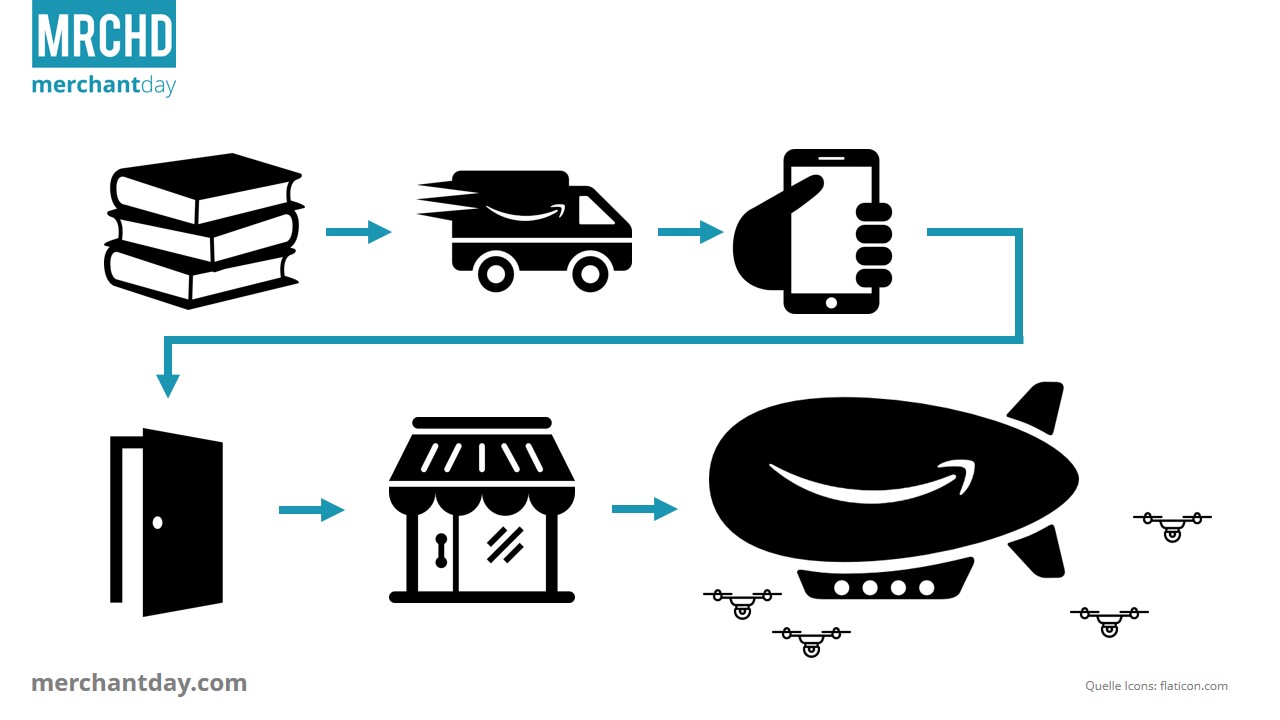 The dream of an “Everything Store” has long since been expanded and improved by many other business areas. A 2-day delivery became a 2-hour delivery, a supermarket without staff, an entrance door that opens independently for the postman, and a flying warehouse with its own transport drones. Much of this is already actively under development or is even already in live operation.

Jeff Bezos realized early on that Amazon will only be successful in the long term if the company grows permanently and extremely fast. His initial business, the sale of books, had been really important to him. It was just the first building block. For Bezos, the question was always at the center of attention: “Does this product have an advantage if it’s faster, bigger or simpler?” While for Apple, for example, the combination of design and technology has always been fundamental to the whole business, for Amazon, from the beginning, it was just scalability. Coupled with the principle of “customer first”, this has resulted in a global company that employs half a million people and has a broader base than almost any other.

While the retail and specialist trade is stagnating in growth and treating its customers as a means to an end, Amazon has taken exactly the opposite path. With every new product, the company asks itself again and again: “What added value does it bring to the customer? Only if this question can be answered meaningfully, a new service, a new product, or any kind of change is pushed forward at Amazon.

Profit is not important for Bezos – only the growth that can be generated from a new idea is important. A good example is the Kindle. The entry-level version is already available for 70,00 EUR. The parts of the e-book reader alone cost Amazon already 69.00 EUR. Add to that the production costs of about 4.70 EUR – and you get a loss of about 3.70 EUR per sold kindle. Marketing, shipping, and support are not even included. Nevertheless, it’s again for Amazon, because, with every kindle sold, the number of books and other media sold increases. So more data can be collected and more targeted advertising (e.g. via AMS or AAP) can be done. The customer is happy because he was able to buy a high-quality but cheap e-book reader and is unlikely to buy a similar device from Amazon’s competition a second time. Win-win for both sides.

Amazon has never cared much about the grumbling and complaining of investors and shareholders. Growth, scalability, and customer satisfaction are always at the center of everything we do. If profit is ever made, it is immediately invested in new business areas and products – 100% growth. A central link in this process is our own service “Amazon Prime“, which combines video and music streaming as well as free shipping and faster delivery conditions. Prime customers spend more money on Amazon and use the platform’s various services more intensively. The attractive streaming offers and special sales days such as Prime Day or Black Friday are winning more and more prime customers for Amazon, thus further expanding its loyal regular customers. This is an investment that will pay off in the long term because prime customers rarely shop anywhere else but at Amazon.

There are an unbelievable 300 million products on Amazon.de alone and every third euro is probably already being spent on the marketplace. Compared to other e-commerce platforms, Amazon is growing much faster and with all its additional services is more and more connected to people’s daily lives. The in-house search engine “A9”, for example, delivers 1.2 billion advertisements every day, which is placed by the sellers and Amazon vendors.

And Amazon is penetrating more and more areas and industries: retail, pharmaceutical, food, advertising, cloud, B2B, finance. And with each additional building block, Amazon gets even more data, more reach and thus becomes more and more attractive for end customers, traders, and advertisers. A system called “Amazon Flywheel“, which Jeff Bezos already thought up in the early days.

Bill Gates claimed in 1995: “The Internet is just a hype”. Anyone betting or even hoping today that Amazon will disappear again and good old retail will blossom again will be just as wrong as Bill Gates was 23 years ago. Just look at all the business areas in which Amazon is active:

You’re welcome to criticize it. You don’t have to like it. You can also ignore it. But: NO, Amazon will not go away again. The success of Amazon will continue. It is quite possible that Amazon will soon be more strongly regulated by governments and authorities. But the fact remains that Amazon is more and more a part of the daily life of many people and is becoming more and more. Blessed are those who do not ignore these facts and who orientate their own business towards them in the medium term.

At the follow-up conference, I held a presentation on “Why is Amazon so successful”. You can download the slides of the presentation here:

This site uses Akismet to reduce spam. Learn how your comment data is processed.