Amazon Robotics was founded in 2003 with the idea that E-commerce requires better order processing for the customer. The headquarters are in Boston, the epicentre of robot innovation. Amazon Robotics is a wholly owned subsidiary of Amazon.com.

Amazon Robotics automates fulfilment centre operations using various methods of robotics technology. On Youtube you can find documentaries as short videos, which also show the application of robot technology in Germany. With the location Winsen an der Luhe, the most modern logistics center was built in 2017.

The technology of Amazon Robotics includes the following possibilities:

How Does the Transport-Robot Technology Work?

Usually, goods are operated either by a conveyor system or by man-operated machines. Frequently, machines such as forklifts are used to move the goods in the logistics center. The approach behind this is as follows: the goods are stored in a mobile database and when the order is received, the software calls the nearest automatically steered vehicle (Bot). 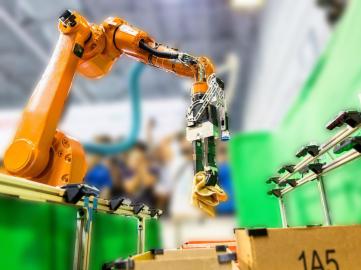 The mobile robots navigate by themselves through the warehouse using computer-assisted barcode stickers on the floor. In order not to collide, each bot has a sensor on the drive unit. Once the destination has been reached, a gondola moves upwards by means of a corkscrew-like movement and transports the person to the desired object.

Currently there are two different Amazon Robotic models. The smaller model can lift pallets weighing 500kg and the larger model can lift 1500kg. Both devices currently have orange as the signal colour. The speed is just over 1 meter per second. The battery-operated robots have to be recharged every hour for five minutes.

Automated logistics processes are becoming increasingly important in e-commerce fulfilment processes. This involves the replenishment of stocks and the distribution of goods. The complete process with Amazon Robotics is much more efficient and precise than the traditional process, where a human worker drives to the right shelf, finds the item and pulls it out.

Amazon Buys the Kiva Robot Systems – Isolation of the Technology

In March 2012, Amazon purchased Kiva Systems for $775 million. This was the second largest investment in the company’s history at the time. Since the acquisition, Kiva Systems has remained very quiet. All marketing activities were stopped and most of the sales staff were dismissed. Although the company is still active in manufacturing processes.

Industry experts speculate that Amazon is not interested in sharing this efficient and powerful technology with the competition. In August 2015, the company was officially renamed from Kiva Systems to Amazon Robotics.