ACoS is the abbreviation for “Advertising Cost of Sale” and is an essential indicator for the management of advertising campaigns within Amazon Advertising, which measures the effectiveness of a campaign on the basis of the cost of sales. Here is shown the relation of advertising costs to the generated sales. If, for example, a merchant switches a headline search ad in his Advertising account and achieves a turnover of €10,000 with a click rate of €1,000, his ACoS is 10%.

According to the previous example, it is recommended to minimize the ACoS, otherwise you risk that your advertising costs will exceed your profit and you will be in the red. How can you prevent this and how high can the ACoS be set at maximum in order to stay in the profit zone? The so-called break-even ACoS can help here: it is the highest value that the ACoS can take without a loss being achieved with an advertising campaign. This can be calculated according to the following scheme: 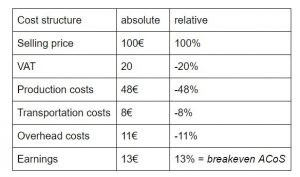 In order to control ACoS, the maximum bid you set for the keywords is essential. But how high can you set the click bid? Of course, you want to generate as many clicks as possible. However, this is usually associated with a relatively high click price, which in turn increases the ACoS. As a rule of thumb, the following calculation has proven to be particularly practical. So, for instance, in this case the maximum bid is €1,95. Theoretically, applied to our example, each sale would generate an average of €13 in advertising costs. The ACoS would be exactly on the break-even level.

Peculiarity of ACoS for vendors

Vendors have to be careful double when operating the ACoS. First, ACoS counts not only vendor sales on Amazon as sales, but the purchase of every item of the same brand too, regardless of the seller. So it can happen that the campaign seems to perform well according to the ACoS, but the profit is not generated by the vendor (sales and dispatch by Amazon), but by another seller who also sells the advertised product.

Secondly, the unit profit and turnover of vendors are actually based on a different basis than ACoS. Since vendors do not sell the goods themselves to the end consumer, but to Amazon itself, the profit is not calculated according to the above scheme. Instead, it is relevant the margin on the sale of goods to Amazon. It should also be considered that ACoS is based on end-user sales too, so not just on the sales generated by the vendor through the sale of goods to Amazon.